Posted on February 14, 2020 by Chan'Cellore Makanjuola

Fall 2015 was the beginning of a new journey for Dania Orta-Alemán. A native of Mexico City, Mexico, she came to UC Berkeley as a master’s candidate at the School of Public Health. Little did she know that an I-House Gateway Fellowship dinner the following year would lead her to her soulmate.  The dinner was to honor fellowship donors and recipients. Zunaid Omair, a Ph.D. candidate in electrical engineering from Bangladesh, happened to be at the same event. 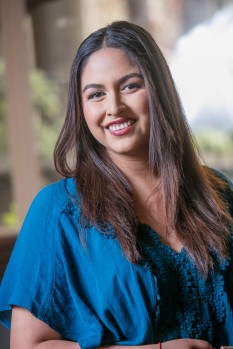 “We were just sitting at the same table and I remember he changed his card to sit by my side,” she said. Although he had to change tables again, Alemán said she was able to get his contact information. “I asked for his Facebook, and when he first told me his name, I didn’t understand it,” she said, giggling. “I just pretended I understood it. I added him on Facebook just to make sure I got the name correct and, yeah, that’s how we met, basically.”

Afterwards, the two would often see each in the I-House Dining Commons.  “I usually sat alone because I was very busy,” she said. “It was my last year, and I was applying for Ph.D. programs . . . and every time he saw me at the table sitting alone, he changed his table to join me.”

Soon after, the two began dating with their first date being at the Oakland Museum of California. Coming from different backgrounds helped the couple learn more about each other’s cultures. “I knew nothing about Bangladesh and the South Asian culture,” she said. “With [Omair], now I know everything with food . . . how family relationships are . . . religion, and the history of Bangladesh, [including] all the countries around Bangladesh.”

She said her husband has learned from her culture as well. The two have traveled to Mexico and he has met her family. “I have introduced him to all sorts of Mexican food that they don’t sell here in the U.S., and he’s learning Spanish,” she said, adding that the dynamics of their relationship were very interesting because they were raised in very different cultures.

When asked what their families thought of the relationship, Alemán said her parents were very open, but it was a bit more difficult on her husband’s side. “My family’s reaction was good . . . I guess they saw me happy and they were okay. On his side, it was a bit more complicated mainly because of religious issues,” she said. “We are from completely different religious backgrounds. Although we are not religious, our families kind of are.” Alemán was raised Catholic, and Omair was raised Muslim, where “the rules around marriage [are] very different,” she said. Alemán said that now his parents are on board with the relationship. “We’re very happy about that.”

Alemán stated that she enjoyed living at I-House while pursuing her studies. “For me it was one of the best experiences I had in Berkeley, if not the best experience,” she said. “I think [Zunaid and I] both made great friends there, and, in a way, I think it gave . . . well for me, it gave us everything. Like, we met each other. We are very grateful [for] being able to live there.”

The opportunity to experience other cultures was a defining moment for Alemán while at I-House. “When I was living in Mexico, I had very little interaction with other cultures,” she said. “But when I came [to I-House], it was the first time that happened. Now I am marrying someone from [the other side of] the world. That’s fantastic.”

Dania and Zunaid returned to I-House on February 13, 2020 to take photos for their wedding.

Dania and Zunaid on their wedding day

Bonnie Johnston, the Financial Aid Coordinator for international students, remembers them well as they were both Gateway Fellowship recipients.  Bonnie said, “My heart was so warmed just now as I just happened upon a wedding photo shoot at International House at UC Berkeley. Angela Rauch, our Alumni Coordinator, called me to tell me that two I-House Gateway Fellowship recipients were getting married later today. I greeted the groom, Zunaid Omair, Ph.D. student from Bangladesh who began in 2016 and Dania Orta-Alemán from Mexico, who began an MPH in 2015.” She adds, “I can’t quite take credit as the matchmaker, but I come close.”

Bonnie found the group photo below taken at the 2016 Gateway Fellowship dinner that fateful night when the couple first met. For Dania and Zunaid, I-House truly was a “Gateway to love.” ❤

Chan'Cellore Makanjuola is a second-year graduate student at UC Berkeley's Graduate School of Journalism, with her concentration in documentary filmmaking. She served as the I-House Social Media Ambassador from Fall 2019-Fall 2020 with the goal of capturing the magic that continues to make International House a prime residential experience for UC Berkeley students.
View all posts by Chan'Cellore Makanjuola →
This entry was posted in I-House Alumni and tagged Friendship, I-House Alumni, I-House Berkeley, I-House couples, love, love connection. Bookmark the permalink.

6 Responses to I-House, a Gateway to Love: Mexico Meets Bangladesh

This site uses Akismet to reduce spam. Learn how your comment data is processed.