Big Thanks for Big Give!

Posted on March 19, 2020 by Chan'Cellore Makanjuola

Last Thursday, March 12th, was Cal Big Give. A day where friends, family, and everyone part of the UC Berkeley community could donate to support fundraising efforts for individual schools and programs. Current residents, including myself, and members of the I-House Resident Council, came together to rally support for the event by encouraging others to donate to I-House during the 24 hours of Big Give.

A week prior to the event, Resident Council members Mikey Mohan and Benny Corona wrote letters that were sent to former resident council members about the Nancy Stock Tivol Resident Council Match. Nancy, an I-House alumna who lived here between 1965 and 1967 and served on the Resident Council, pledged a challenge match if I-House were to receive at least 180 gifts before the event was over. With a $10 minimum donation, the Big Give team gathered support from I-House residents and staff who helped us exceed our giving goals before the 9 p.m. (PDT) deadline on March 12th.

The Big Give team brainstormed different ideas that would appeal to residents. A table was set up in the Great Hall on March 11th, with cakes and raffle tickets ready to hand out for those who donated. Due to new COVID-19 regulations around public gatherings, the coffee hour scheduled for that evening was canceled, however, students could still come to the Great Hall to study. For the Big Give team, this was a great opportunity to still reach out to students for their support. One idea was setting up a large tri-fold poster display and taping colorful notecards on it that residents signed after giving. END_OF_DOCUMENT_TOKEN_TO_BE_REPLACED

Support I-House Berkeley for Big Give!

Posted on March 12, 2020 by Chan'Cellore Makanjuola

The time has finally come for Cal Big Give 2020! We love our I-House community and want to keep it strong and growing! Donate today to help current and future residents experience the joy of living at I-House Berkeley! Watch the video below to see how you can show support! Giving ends at 9pm (PST)!

Our goal is to reach 180 gifts before the night ends!

Below are steps from our I-House Alumni, Communications, and Philanthropy team on how you can donate:

Post on social media throughout the 24 hours of Big Give. Below are a few contests you may wish to plan for:

Pro tips: Set an alert to remind you to post during your favorite contest time(s).  Make sure to use both hashtags, #internationalhouse and #calbiggive, for posts to qualify for contests.

“Big Thanks” for your support!

Big Give is a week away!

The countdown is on and I-House is buzzing with excitement about UC Berkeley’s Big Give on March 12th! We are grateful for all of your support throughout the year and wish to thank you in advance for considering taking part in this annual all-campus fundraising drive.

Generous donors want to help encourage participation, so challenge matches will be made if we hit our goal of 180 gifts during Big Give! END_OF_DOCUMENT_TOKEN_TO_BE_REPLACED

Posted on February 26, 2020 by Chan'Cellore Makanjuola

Throughout the year, International House, Berkeley hosts themed dinners, honoring cultural heritage and holidays celebrated around the world. Dinners range from Oktoberfest to Native American Heritage, as well as Diwali and Lunar New Year. For the month of February, residents and guests were treated to a special dinner in honor of Black History Month. The February 20 dinner, led by sous-chef Ray Sharp, featured a range of Southern food which paid homage to African American heritage. “Red Beans and Rice, Stewed Okra with Fire Roasted Tomatoes, Gumbo, Braised Collard Greens w/ Ham Shanks, and Southern Fried Chicken, there were so many dishes I could choose from for this event,” he said.

Sharp has been the lead chef for the African American Heritage dinner at I-House for the past two years. Born in San Francisco but raised in Berkeley, Sharp has been cooking Southern cuisine for years. “Most of the dishes I placed on the menu for this event are dishes that I have made hundreds of times working as the Chef de Cuisine at Elite, a New Orleans inspired restaurant in San Francisco.” END_OF_DOCUMENT_TOKEN_TO_BE_REPLACED

Posted on February 14, 2020 by Chan'Cellore Makanjuola

Fall 2015 was the beginning of a new journey for Dania Orta-Alemán. A native of Mexico City, Mexico, she came to UC Berkeley as a master’s candidate at the School of Public Health. Little did she know that an I-House Gateway Fellowship dinner the following year would lead her to her soulmate.  The dinner was to honor fellowship donors and recipients. Zunaid Omair, a Ph.D. candidate in electrical engineering from Bangladesh, happened to be at the same event.

“We were just sitting at the same table and I remember he changed his card to sit by my side,” she said. Although he had to change tables again, Alemán said she was able to get his contact information. “I asked for his Facebook, and when he first told me his name, I didn’t understand it,” she said, giggling. “I just pretended I understood it. I added him on Facebook just to make sure I got the name correct and, yeah, that’s how we met, basically.” END_OF_DOCUMENT_TOKEN_TO_BE_REPLACED

Last Chance to Support I-House in 2019

Best wishes for peace, prosperity, and progress in the New Year

If you have already made a gift in 2019, we sincerely thank you. If you still would like to make your annual gift, it’s not too late to donate. 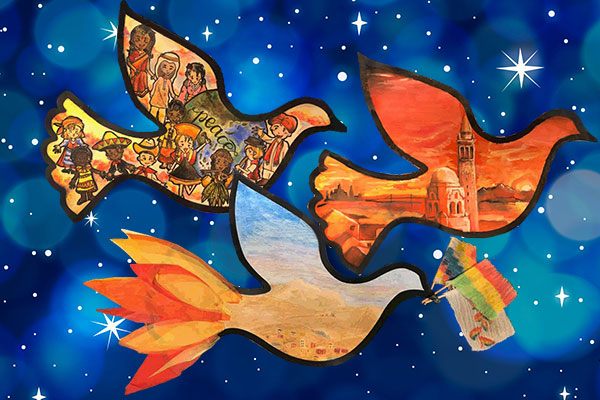 As we make the transition to 2020, I-House is most grateful to all who have participated in our Annual Appeal or otherwise made a recent gift. If you haven’t yet had a chance, please consider donating now or visiting the online version of our Annual Appeal.  If you still would like to make your 2019 gift, it’s not too late!  With your support, I-House is able to foster a more just and peaceful world through intercultural understanding and mutual respect. END_OF_DOCUMENT_TOKEN_TO_BE_REPLACED

Posted on December 24, 2019 by Chan'Cellore Makanjuola

Season’s Greetings I-House! For many, the winter holiday season is a time to spend with friends and family as well as take time for reflection. From Hanukkah to Christmas to New Year’s, our residents have a unique way of celebrating the holidays at home.

“Christmas in Egypt is celebrated in January,” said Deena Sabry, a resident from Cairo, Egypt who studies at UC Berkeley’s Graduate School of Journalism. Sabry who is Muslim, acknowledged the Christmas celebrations in Egypt given her country’s large Coptic Christian population.  For New Year’s, Sabry said celebrations are up to the individual. “It truly just depends on the person and their family and what they want to do,” she said, adding that some people might spend it with their friends partying or stay home with their family.

Christmas and New Year are a big deal in Nigeria, according to I-House resident Gbemisola Akinsipe. “I’m from a Christian family . . . so we usually have a Christmas service or carol, and then for new year we pray together.” Akinsipe said that beyond the church activities, the holiday season is “a time for family, food, and a lot of gifts.” END_OF_DOCUMENT_TOKEN_TO_BE_REPLACED